I’m somehow reluctant about this post, because I can’t foresee whether it will be received well. It might be insulting to some, however I’m not really sorry for that.

So much has happened within the last couple of weeks. It started out as a common experiment that we tried in our closed fb group. The premise was not to get annoyed, no matter what happens. It was a resolution, a decision and the prospects looked promising.

I failed the next day already. Shame, for someone who proposed the whole idea. I couldn’t do it, and here’s why. I talked to a friend who works in similar field than I do. She was just about to organize some of her events and I wished her luck and lots of participants. We discussed a bit about the apathy and how people are sometimes unwilling to respond to your calls and offers. I mentioned that it happens sometimes that I get low attendance, even though it’s really cool stuff going on there. She commented I’ve got a wrong target group and actually wasn’t the first to say that. There were some colleagues who advised me to only do things for public that pays well. Free or voluntary work is no good, because people don’t value it. This is true, I suppose and they were right. But I felt really uncomfortable to “pick” the target group according to what they can afford to pay me.

I recall a situation several months ago, when I got a call from someone who wanted to hire me as a personal coach. We met once through skype, as he wasn’t from my country. To make a long story short – he was a very influential man and held a demanding position in a multinational company. He told me about his job and it turned out he was making money by selling companies in crisis. He was literally making profit out of other people’s misery. The more misery, the better, because he could buy it cheaper and make profits afterwards by selling. He was really proud of his reputation. From our work together, he wanted to be even more efficient at what he did. And my name came accross as a recommendation that my work produces effective results. I felt trapped and like a prostitute, because I’m obliged to follow the client’s hopes and help the client in whatever it is that they want to achieve. But I couldn’t work with this person, so even though I was promised the highest wage I got ever since, I couldn’t do it, because of our value dissonance.

Slovenia is currently undergoing a migration crisis as masses of immigrants from Syria enter EU. Since our country is so small, we can’t handle hordes coming in. People are scared, confused, which reflects in hatred speech, hostility, etc. Though there are many volunteers helping out, still the situation is quite chaotic. And I’ve just been there, talking to a coach colleague and we discussed how little interest sometimes people show to attend events, workshops etc. Like there was nothing else more serious to talk about.

While thinking about all this, I figured: “Hey, it’s so easy to be a “business or a life coach”, have rich clients who pay loads of money and who deal with not-life-threatening problems. It’s cosy to have clients like that. But who cares about people at the bottoms of society? Who cares about those who cannot pay, who are forgotten and viewed faulty for their situation? Like Roma people, drop-outs, junkies (word used intentionally), women who had an abortion, those who cannot find a job because they are too old or don’t have enough skills? Who cares about these?”

Are we professionals meant to share our knowledge to improve people’s lives who are already privileged and who can AFFORD to be even more priviliged? It feels like a sort of pornography to me. And it hurts me, knowing I’m no better. And it annoys me that I cannot do much to make things better. And I’m angry with humanity who has failed so many times. Today so few people care about philosophy, but so many about finance. And it’s a self-fulfilling prophecy that I have no idea how to break, because I’m an integral part of it. And this sucks.

So I applied to be a volunteer in the field, working in direct contact with migrants. I’ve spent yesterday with them among other volunteers. It’s so much different than what you are told in the media. It’s not at all like “people talk” about. I loved spending time there. I loved offering help where it was needed. So I guess I will never be able to choose my target group according to current marketing and entrepreneurial standards. Because I’m not an entrepreneur. I’m just a simple human being who is lucky enough to have the knowledge and skills to help another human being achieve the change they want to see in their lives. And I can’t use this gift and opportunity just because somebody can afford to pay me. They are not for sale.

So I’ve failed not to be annoyed. And I’m not sorry. 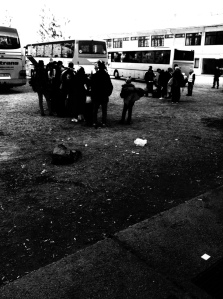 This is how everyday reality looks like for some. And all of this because they were born in a wrong place. Does that make us accountable for not caring and taking our privileges as granted?

2 thoughts on “Everybody wants to be a coach, but not for everybody”